The Gallery on the Lake is celebrating its 17th year of operation this year and will be showcasing an incredible line-up of world class art to help Canada celebrate its 150th birthday.

Gallery owner Esther Inglis believes that acquiring exceptional art, only available at the Gallery on the Lake is one of the best ways to mark this significant milestone in Canada’s history.

The Gallery on the Lake, one of Canada’s largest retail galleries, located on the outskirts of Buckhorn village, is noted for its impressive list of changing monthly exhibits and the 2017 season exceeds all expectations. These world class exhibits reinforce the Gallery’s status as a premier destination for Canadian Fine Art collectors.

Voted one of the most beautiful galleries in Ontario by Days Out Ontario, the Gallery on the Lake provides wonderful respite from life’s stresses. The gallery kicked off its 2017 season with an exhibit by renowned landscape painter Lucy Manley, a local artist from Keene. The Manley exhibit opened on April 29 and ran to May 26 .

Manley’s exhibit will be followed by Speaking of Trees, an eclectic collection of  new works by  Wendy Bermingham and Sheila Davis. It is worth noting that Bermingham’s painting “Oh Canada” was chosen for the Ontario Society of Artists exhibition Mosaic in celebration of Canada’s 150th anniversary.  The artists will be present on June 4 from1 to 4 p.m. for the opening reception to meet the artists.

On July 1 , the Gallery celebrates Canada’s 150th Birthday. The gallery marks the occasion by hosting a group show entitled Celebrating Canadian Artists with artwork including sculpture by our very best artists.

“My project involving Canada’s Houses of Parliament now has two large works on canvas in the collection of the Senate,” says Tony Batten, who was chosen to provide paintings for the Canadian Government in honour of the sesquicentennial.

“In addition to that I have completed two large canvasses of the House of Commons.  So, I have entered two significant national collections as the year gets moving. Needless to say I am delighted. I still have to create two large images of the spectacular Parliamentary Library for its own collection.”

In August, the gallery salutes Canada’s Aboriginal peoples with an exhibit by Christian Morrisseau. New works from Lloyd Wilson, Julia Veenstra, and Steve Tracy take the show into the fall and an exhibit by John Lennard wraps up a year of exceptional Canadian art.

The opening reception and Meet the Artist is held on the Opening (first) day of each exhibit in the gallery rotunda. 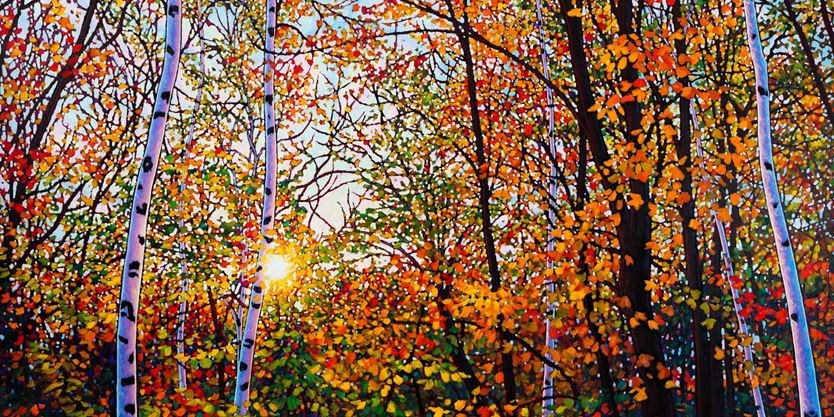